By Bexus76
4/24/2020 9:05 am
The Columbus Cardinals, a cap-strapped team with a streak of losing seasons, may finally break their playoff drought! but it won't be this year...

Still burdened by nearly $70 million in dead cap, and unable to fill a 46 man roster, the GM decided to let go of every player unwilling to take a massive pay-cut and signed every hobo off the street he could find willing to work for table scraps.

After Joe Burreaux publicly announced that he'd be willing to play for anyone, even Cincy, as long as he didn't have to play for Columbus, many other draft-eligible prospects joined in with one even saying "I'd rather eat a week-old Spam sandwich while watching a mime have a stroke." Yet, somehow, the Cardinals still managed to bring 15 new rookies to camp this year.

In summary, ONE out of 9 draft picks had a positive training camp. 9 out of 15 rookies busted for a grand total of -33, which hey, for the Cardinals, ain't bad.

By blazinwarmaker
4/24/2020 9:29 am
Buffalo also was looking forward to an opportunity to increase upon a 3 win season but the draft/training camp was not kind to us either. Only 3 of the 9 players selected actually trended up and 3 were cut immediately after training camp. On the good side my 2nd and 3rd rounders did make some nice gains and will be starters. 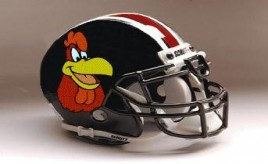